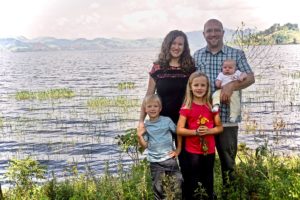 I (Brad) am excited to be a part of a team made up of Rwanda Friends, Burundi Friends, and EFM, who are praying about and planning towards Luke 10 Exploration trips. We hope to go to Tanzania in August and to South Sudan in October.

Our D for D team has finished visiting each of the Rwanda Friends Church pilot groups to help them to evaluate and develop their plans for discipling small groups from their local churches and the surrounding community.

Burundi and Congo D for D groups are preparing their teams so that they can launch into discipling a larger group from their local churches and their surrounding communities (which we call the mobilization phase).

Please pray for our leadership team as we follow up and mentor the leaders in those groups in Rwanda as well as in Burundi and in Congo.

My studies are going well. They are both challenging and very applicable to ministry now and towards our part in God’s expansion of his mission throughout Africa.

Our family has been through a rough patch lately, with all three kids sick with colds and Ian sleeping poorly for the past several weeks. This has affected us all, lowering our energy, motivation, and mood. There were times I (Chelsea) prayed and prayed for him to improve and my prayers kept going unanswered. It was really difficult, but God helped me to keep trying to put my trust back in him, to depend on him, and to persevere. I am thankful for the sense that he was with me, even in those dark nights. I am also thankful that Ian’s sleep has gotten a lot better now and we can see the light at the end of the tunnel.

Otherwise, we are pretty busy as the kids’ school year wraps up and we look ahead to summer. We will miss the routine of school, but also will enjoy welcoming some visitors (including my family!), going to a missionary conference, and Brad joining a team traveling to Tanzania.

Alaki Tresor is the leader of the D for D group in the Uvira area of Congo Friends. He is the son of the current superintendent of Congo Yearly Meeting. He described some things in his testimony recently that showed new levels of transformation. Apparently, at least in their area of Congo, children are dependent on their parents for most of their lives. When he went to college his dad said, “I will pay for all of your expenses.” When Alaki brought home his fiancé to meet his family, his father reassured him that he would continue to provide for him even after they got married. After they got married and had children, his father continued to provide a place for them to stay in his home, and all the money they needed for everything.

In our trainings about becoming all that God created us to be, Alaki realized that he was completely dependent on his parents and was not using his strengths and abilities well. So, he told his parents that they were moving out. He moved 100 km away to Baraka, got a job, bought some land, built a house, and in the last year, as his father has been quite sick, he and his family are now caring for his parents in their home. He is discipling a group of people in Baraka and also giving some leadership to the other teams in that area of Congo.