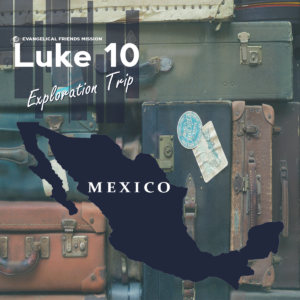 The first of ten Luke 10 Exploration Trips in 2022 will be going out this week, from April 19-29, with a team of 15 to three states in Mexico! Thank you for praying for EFM’s Luke 10 Initiative as Evangelical Friends discern where to launch new mission fields as part of EFM’s five-year goal! See more information here.

Trent Jacks of EFC-MAYM and Edwin and Maria Giron (Maria is EFM’s Missions Mobilizer for Hispanic Friends), will be leading this trip to Mexico. Matt Macy, EFM Director of Mobilization, and future missionary Nathan Macy will also participate in this scouting trip.

EFM is partnering with Mexico Yearly Meeting (MYM) for this Luke 10 Initiative in Mexico. MYM’s Vision Mexico 32 (VM32) is to see Evangelical Friends Churches planted in all 32 states of Mexico by 2032. Ten members of this Luke 10 Exploration Trip are from three states in Mexico, which includes five national pastors/leaders and five young potential future missionaries from Friends Churches in Mexico.

We look forward to sharing more news about the other nine Luke 10 Exploration Trips as each prepare to embark on their discernment journeys!