The sixth Luke 10 Exploration Trip in 2022 is departing today, October 10! There have been ten Luke 10 Exploration Trips to ten different country/people group destinations being planned in 2022 as EFM discerns where new mission fields will be launched as part of EFM’s Five-Year Goal! The most recent news is that eight of the first Luke 10 Trips will be completed in 2022, with two of the first trips being planned for early 2023. EFM is gathering for the next Luke 10 Think Tank on November 2 in Wichita, hearing reports on what each team has seen for EFM’s CAN GO Criteria and discerning next steps. EFM’s Five-Year Goal Benchmarks aim to see follow-up Luke 10 Exploration Trips in 2023 to promising sites for further discovery and affirmation, with EFM approving sites of five new fields at the November 2023 Luke 10 Think Tank and EFM Board Meetings. See more information here! 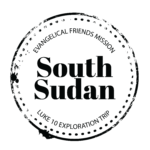 The Luke 10 Exploration Trip to South Sudan travels October 10-21, sent by EFC-Rwanda and EFC-MAYM. Team Leaders Jean Paul Nsekanabo (EFC-Rwanda Assistant General Superintendent) and Brad Carpenter (EFM Missionary to Central Africa) will travel along with three other representatives from EFC-Rwanda; Nicodeme Basebya, Gerard Munyanganizi, and Theodore Uwiragiye, plus Matt Macy (EFM). Some of these Rwandan Friends Church leaders are exploring God’s calling to go as missionaries to South Sudan.  It is encouraging that EFC-Rwanda has recently coordinated a week-long missions emphasis which included daily evening services for missions prayer and teachings, ending with a yearly meeting wide offering towards Luke 10 Exploration Trip costs. In August 2022, at an EFC-Rwanda missions vision training event for pastors, tw;elve pastors stood to publicly state that they are willing to seriously explore going as missionaries from Rwanda to South Sudan or elsewhere as the Lord leads.