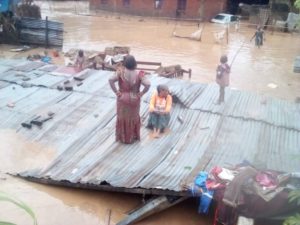 Uvira, Congo, where Evangelical Friends are located, is currently in need of emergency aid after heavy rains and flooding over the weekend. All of the rivers are way over the banks. Brad Carpenter and David Thomas are among the D for D team who have been working with Friends in the area over the past couple of years. Brad reported Saturday that the water plant is among the buildings that were washed away in Uvira, and that was before the flooding got worse yet as the rains continue.

Lusungu, the Legal Representative of EFC-Congo, reported that Friends in nearby cities of Mulongwe, Kasenge and Songo are also impacted. Lusungu said on the evening of the 19th:

“Uvira is in the South Kivu Province in the Eastern part of the Democratic Republic of Congo, about 25 kilometres from Bujumbura, Burundi. Uvira is made up of three communes, each with a big river: Kalimabenge River, Mulongwe River, and Kavimbra River; which all feed from the mountains into Tanganyika Lake. Uvira resides next to the lake and up into the mountains.

During the night of April 17, heavy rains caused enormous flooding while the rain continued. Then even heavier rains came on the 19th and in the parts of the city where these rivers meet Tanganyika Lake , Uvira became like a lake. Many families have died and houses destroyed, while the total count is unknown at this time due to ongoing flooding.

From Kavimbira to Mulongwe many of the people are displaced to Kalundu Commune, some staying with families, and others staying in schools and churches.

Up to this point, no emergencyfood or drinking water assistance has been received, or any other assistance to the victims of the flood, from the government or anyone else. EFC-Congo is calling on members of EFC-Uvira churches to welcome flood victims and offer them support.”

Out of 129 EFC-Congo members who are affected by the flood so far (as of Sunday, April 19):
EFM is sending emergency funds to EFC-Congo in Uvira today, to help in assisting both church members and members of the community that the church is helping. Brad Carpenter and David Thomas are helping EFM monitor the situation with readiness to send more emergency aid later this week and next week as appropriate.
As the Lord leads, here are ways you can send donations marked for Congo Flood Relief:

In Christ’s service together,