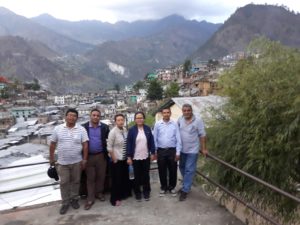 May was a busy month for a yearly meeting in Nepal called “Evangelical Friends Church-Nepal.” This is the yearly meeting that EFM missionaries John and Sangi Vanlal established along with many Nepali Friends leaders. Today, it has more than 40 established churches and an average attendance of around 3,000. A year and a half ago, John and Sangi retired and returned to their home in India. EFC-Nepal continues to move forward under the leadership of Pastor Amen Thapa and an executive committee.

Pastor Amen recently reported that in the months of April and May, 130 new believers declared publicly their decision to follow Jesus Christ by taking water baptism. That is a huge step in a country like Nepal where Christianity is not legally recognized and where the government has anti-conversion laws in place. Persecution is pretty much guaranteed for these new believers.

On May 24, there were nine students who graduated from three months of training at EFC-Nepal’s Bible school in Kathmandu. There will be another group of students who will receive training in the second half of this year. These students go back to their churches and communities in order to help with pastoral and evangelistic work.

In May, several from EFC-Nepal also did a Luke 10 trip to the Far West of Nepal where the need is great for the gospel. Along with EFM missionary Samson Retnaraj, they are exploring ways to plant churches in this vast area using CHE (Community Health Evangelism) methods. We look forward to hearing more details about how this trip went. Pastor Amen simply said, “It was an awesome mission trip.”