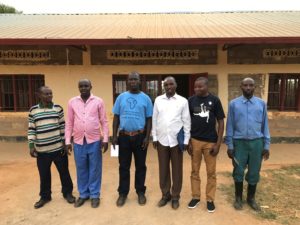 I was standing in a lunch line with Paul Morse the other day, and he asked me, “Tell me about Musovu!” “There are a lot of exciting things happening in Musovu,” I replied, but “How do you know about Musovu?” He told me he had received my newsletter from early 2012 with a picture of the Musovu group listing out in leaves all the Discipling for Development lessons they had studied together in the past years. Then he asked me, “So how is Rutikanga?” I exclaimed, “You know Rutikanga! Do you know Ntakirutimana? Kezia? Alphonsine? Ugiriwabo?” He knew their names, although his pronunciation was off on a few. I was able to tell him that they are doing great! There is so much that has happened in their lives since 2012! God has used them in some amazing ways. We no longer coach them every week as a D for D team, but they are still growing in amazing ways! Ntakirutimana is discipling a new group of young men in a nearby town where he moved and opened up a store. Rutikanga and Alphonsine are reconciled with each other and living in harmony. Bosco and some of the others are helping plant a church about half an hour away by bicycle. Pastor Ugiriwabo has led the church and the community at large in partnering with World Vision to build five kindergarten classrooms for the community. They completely paid for all the labor on these projects themselves! They are providing for their families, their kids are going to school, the church is full, and they extended the sanctuary. Seven or more couples have been married. The kingdom of God is growing among them! They are helping mentor other pastors in the Bugesera region who want to learn to disciple their believers and communities holistically.

I asked Paul, “So, how have you been praying for them?” He said, “I pray for them every day, naming each one.” This is wonderful! It is hard to measure the impact of our prayers, but they do have an impact. How much does Musovu’s transformation have to do with Paul’s praying? We will not know until heaven, but I do know that Paul can claim the promise of Psalm 2:8: “Ask of me, and I will give you nations as your inheritance and the ends of the earth as your possession!” I believe in heaven Paul gets to claim the kingdom of God flourishing in the community of Musovu as part of his inheritance!

God’s desire is that people from all nations and all cultures come to know him. Jesus told us that because he has all authority in heaven and on earth, we are to go and disciple all nations. God has called us missionaries to see the kingdom of God flourish in some places of darkness, bondage, and despair. He has called us to serve people in cultures all around the world. We get to join Jesus praying to the Father, “Your kingdom come! Your will be done in this specific place among these specific people just as it is done in heaven!”

Which missionaries are you partnering with? Which cultures, nations, and people? Which communities are you asking to be a part of your inheritance in Christ? Let’s join Christ in his desire to see people set free, to see his kingdom come, to see his reign come in people’s lives, to see his favor, his grace flourish in their lives! Thank you for praying with us! It makes a difference! Keep up the good work!