And how will they preach if they are not sent?… Romans 10:15 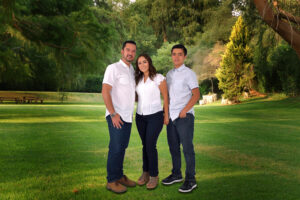 We would like you to share with you our joy and gratitude to God for the beautiful opportunity he gave my husband and I to be part of the team to go on the EFM Luke 10 Vision Trip to Bolivia in January. We invite you to praise God because we were able to see how he is working in such a special way with our Friends brothers and sisters in Bolivia. It was truly a trip that exceeded our expectations. Praise the Lord! 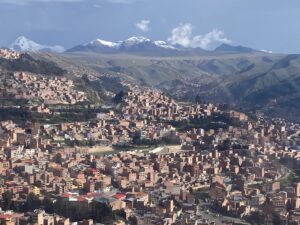 La Paz
On Tuesday, January 11, after traveling about 24 hours, amid a pandemic that presents many challenges when travel internationally, and boarding four planes, we arrived in the city of La Paz, Bolivia in South America. This beautiful city is in the valleys of the Andes with an altitude of more than 13,000 feet (4,000 meters) above sea level and an estimated population of four million. One of the wonders of God that can be seen when visiting Bolivia is Lake Titicaca, considered the highest lake in the world. We were fascinated by the beautiful view of the lake and the panorama of the city of La Paz. God’s creation is truly awesome! 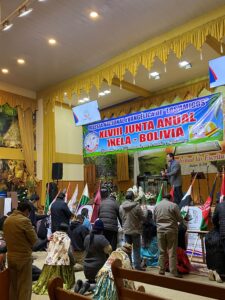 INELA
It was a privilege to be participating for the first time in the sessions of the Bolivian Yearly Meeting named INELA (for its acronym in Spanish) which means the National Evangelical Friends Church. This was a four-day event where around 400 Friends pastors and church leaders from all over the country gathered. INELA recently celebrated their 100th anniversary. We were impressed to hear that about 300 churches were reported to be part of this Yearly Meeting, that’s about 6,000 Friends members! It is important to mention that the main theme for this year’s meeting was “Walking the Mission Path” based on the verse of Romans 10:15. Our team was touched by the emphasis on the theme of missions, from the sermons, the guests, the songs, and even the decoration.

Our Team
Friends USA team was formed by Daniel Cammack- EFM Field Director, Ken Comfort (who was a missionary kid in Bolivia and later Ken and his family served many years in Peru), David Thomas (who grew up in Bolivia as the son of missionaries as well and served as a missionary in Africa for nearly two decades), Roy Lujan (Northwest Friends Yearly Meeting representative), and my husband and I. We are truly grateful to God, that he permitted us have teamed up with these giants of faith, who have left important footprints in his kingdom.

The main purpose of our visit to INELA as a team from the United States was to encourage and stimulate the Bolivian Friends Church towards a more focused global vision. It is awe-inspiring how God has moved through the Friends Church to reach people in Bolivia with the Gospel with churches already planted all over the country. But now, national leaders are feeling a strong impulse to move the Bolivian Friends churches out of their Samaria to go to the ends of the earth to proclaim Jesus Christ to other nations. We are moved to see how the Lord of the harvest is challenging the Friends of Bolivia to go out into the fields. Praise him!

EFM, in the process toward our goal of sending ten new missionary households to start at least five new mission fields, is already eyeing 11 places around the world to conduct exploration trips called Luke 10 Exploratory Trips. One of these 11 places is the jungle between Ecuador and Peru where an unreached ethnic group called the Shuar is centered. One of the purposes of our team, taking advantage of the feeling that INELA now has about doing global missions, was to invite this strong Yearly Meeting to partner with EFM to go explore together and perhaps later form a team to reach unreached ethnic groups, such as in the case of the Shuar people. 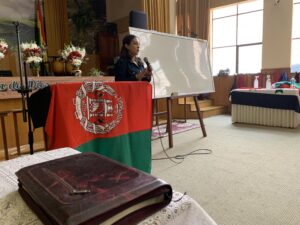 Our Participation
We give glory to God! We were touched to see the receptive hearts and the interest that could be felt every time we had the opportunity to share about missions in workshops, sermons, question and answer panels, and in talks with leaders during meals or free time. It was a very beautiful thing to see the sensitivity of the people to the touch of the Holy Spirit, after preaching, going in front to kneel at the altar to surrender at the feet of Jesus in response to his call to be obedient to the Great Commission.

It was exciting to see that INELA is open, and they are asking for mentorship from those with more experience, in this case from EFM, to know how to raise missionaries, how to raise funds, how to send, learn to have holistic care for their workers, etc. They are eager to know how!

After the Yearly Meeting sessions, an invitation was extended to all the attendees to a planned mission’s seminar, for which less than 10 people had signed up the day before. We were shocked when we saw that there were many people very interested in learning more about the topic of missions, and so at the end, there were approximately 70 people who were present at this seminar where my husband and I had time to share our experience in the mission field and talk about Mexico Yearly Meeting’s VM32 project. 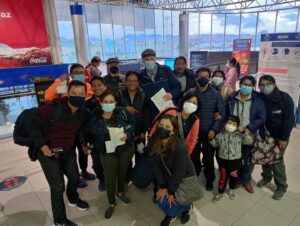 Our Deep Gratitude
We are deeply grateful that God allowed us to have this wonderful experience, to be able to make new relationships and friendships among his people in Bolivia, to be able to talk about what we are passionate about, touch the beautiful Bolivian culture, taste and experience new delicious foods, feel his love for us through the hospitality and generosity of the two families who hosted us in their homes and all the people with whom we were able to connect who showed so much affection towards us, like taking the time to cross the city in terrible traffic just to get to the airport to say goodbye. So overwhelming, all that God allowed us to experience and achieve during this trip!

Finally, thanks to each one of you for being part of our team with your prayers, your support and your demonstrations of love making us feel that God embraces us through you.