The following are stories and updates shared by the Luke 10 Ecuador Team during their time in Ecuador!

The team met up all together for the first time, taking an excited selfie in the Miami airport before boarding the plane to Quito. Beatriz is not present—she will meet up with the team in Macas, Ecuador. 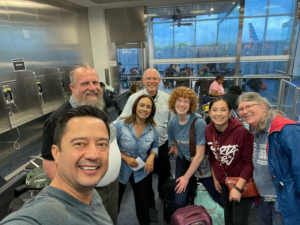 This was the second day in Ecuador. The team spent a rainy afternoon in Quito, Ecuador, looking at historical sites, cathedrals, and museums. Marco, behind Edwin, is the friend of Charles (one of the team’s connections to the Shuar). Marco gave the team a tour around Quito. 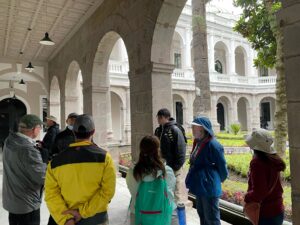 The Shuar leader, who most people call Tigre (leopard) (fun story from his childhood), gifted the team artesanal bracelets. The team was inside his sacred circle and were in the process of learning about some of the leader’s medicinal plant knowledge. 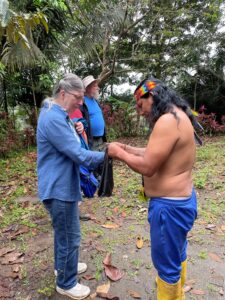 The team visited a Shuar village called Nantar. The people there were believers in Jesus and very kind. In the photo the people were showing the team their in-progress large house for prayer. 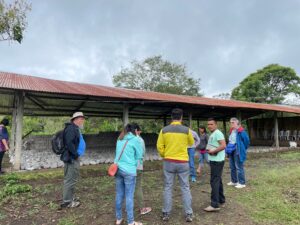 The team ate breakfast in the cooking hut, lit by the fire, a candle, and the early morning light in the middle of the jungle. Franklin, the adopted son of the Shuar leader, was our cook. We often had deep discussions at mealtimes with the Shuar leader and his family. 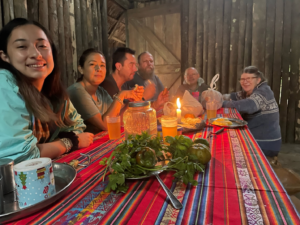 The team arrives to Macas, Ecuador after a couple days in the jungle. They finally unite with Beatriz (the team member from Bolivia) and are joined by Cristina as well for the time in the city. Here Pastor Patricio (who most people call Pato [duck]) took the team to the lookout place over Macas. The view was gorgeous. 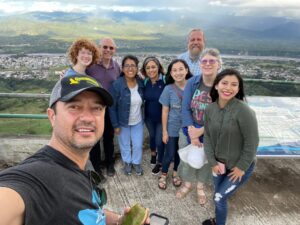 The team spent a Sunday driving to many churches around Macas and Sucúa with Pato. This place was where the team had a sort of VBS with many kids, all team members singing songs and sharing time with the kids.

The team says goodbye to Señor Rodrigo and his wife Yolanda, who owned the beautiful hostal the team stayed in in Macas. The team had had a chance to share the gospel with them, and the morning the team left, Edwin gave Sr. Rodrigo a Bible. Sr. Rodrigo was touched by the team’s visit and continues to pray for the team. 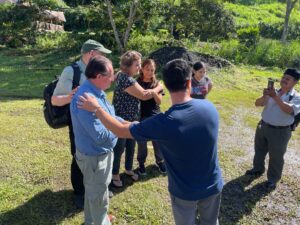 The team arrives to the hostal in Tiwinza after the bus ride from Puerto Morona, bringing sleeping bags they used in the boat trip. This half-outdoor lobby became the team’s meeting room for a couple days as they discussed highlights and debriefed the busy last few days. 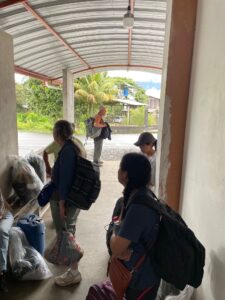 The team eats dinner with the people of Maruk, a village to which the team traveled via a 2-hour canoe ride. The people were very hospitable and shared with the team their strong faith in Jesus and their need for prayer as their church grows. After dinner the people and the team sang songs in Spanish, Shuar, English, and Almira together. It was a special time of connecting with and encouraging each other.

We are full of praise and Thanksgiving for all the ways God has led us on this trip to visit the Shuar communities in the eastern jungles of Ecuador.

We have been challenged at times by long bus rides on curvy roads and strange food but keeping our focus on our hosts and the way they live helps us stay grounded.  God has given us strength and the ability to  persevere as we follow this task.

In the very remote Shuar village of Achunts, we were welcomed and each of our team were asked to share a Bible verse and a short testimony. As we were finishing the church service in the light of two flashlights, Pablo, a Shuar Christian, asked that we all hold hands as a symbol that we are all part of God’s family.  There was a moving of the Spirit of God and three ladies, independently came forward wanting to be part of God’s family.

The task of bringing the Gospel of Jesus to the Shuar won’t be easy, but we have already seen evidence that it is not impossible.  Praise God for whom all blessings flow.

Our team has stayed relatively healthy and encouraged.  We are now wrapping up our time in Ecuador.  Keep us in your prayers.

team members canoeing in a downpour near the Shuar village of Achunts. 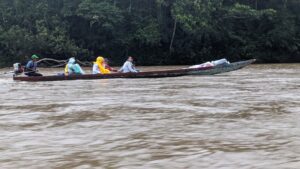 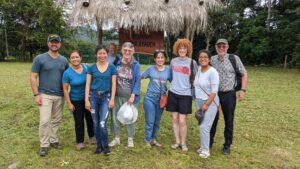 Rebecca and Jael spontaneously led out in songs after supper that attracted a crowd. 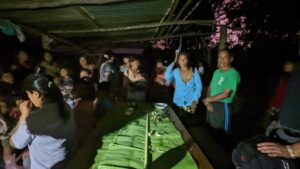