The seventh Luke 10 Exploration Trip in 2022 is departing today, October 17!

EFM has been planning ten Luke 10 Exploration Trips to ten different country/people group destinations in 2022 as EFM discerns where new mission fields will be launched as part of EFM’s Five-Year Goal! Eight of the first Luke 10 Trips will be completed in 2022, with two of the first trips being planned for early 2023. EFM is gathering for the next Luke 10 Think Tank on November 2 in Wichita, hearing reports on what each team has seen for EFM’s CAN GO Criteria and discerning next steps, including further Luke 10 Exploration Trips to promising sites in 2023. See more information aquí. See more information aquí! 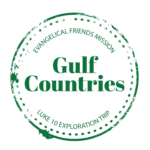 This Luke 10 Exploration Trip travels to two cities in two countries from October 17-24 to explore opportunities with Nepali speaking, immigrant worker populations. They travel to Dubai, United Arab Emirates October 17-21, then Doha, Qatar October 21-24. The team is sent by EFC-Eastern Region in partnership with EFC-Nepal.