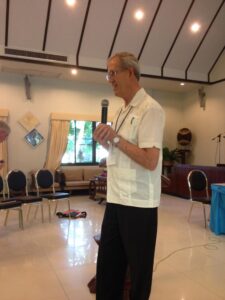 On November 9, 2022, the Evangelical Friends Mission family lost one of our strongest champions – Ron Stansell. Already, we miss him.

Ron’s contribution to the Kingdom of God was deep and wide. You can read more about his rich life in this obituary. I want to highlight his work with EFM, because it was significant.

Ron served on the EFM Board for many years, serving for much of that time as the Secretary. His ability to concisely summarize a discussion is legendary. Frequently, after a long and free-ranging discussion, the board would look to him and ask, “So, Ron, what are we deciding here?” His response was always the perfect summary of the conversation. In fact, we found his ability to capture the groups discernment was so keen that he would often write the minute even before it was approved.

That ability is an illustration of Ron’s wisdom and insight. Honed as a missionary in Bolivia, focused as a professor of missions at George Fox University and exercised as the Director of Evangelical Friends Church International, it was fueled by a deep love for Jesus. Ron’s gentle influence was appreciated by Friends leaders around the globe.

Ron’s love or the world was most at home in his devotion towards his family. Carolyn and he modeled a marriage that nurtured the best in one another and enhanced their ministry together. Their union was seasoned with unmistakable affection. Ron’s joy in being a father and grandfather spilled out whenever he spoke of them, always accompanied with a broad smile and amusing anecdote.

Personally, I benefited from Ron’s friendship. He encouraged me, challenged me, served me, believed in me. My experience was not unique. Many of us are better people because of Ron’s impact on our lives. He exemplified what it means to, “fulfill the Great Commission in the spirit of the Great Commandment.”

I am grateful to God for Ron Stansell. We all are!

P.S. The family has generously asked that donations in memory be made to EFM Leadership Training. We suggest EFM’s Great Lakes Leadership Training ministry. Give online aquí or mail to EFM, PO Box 771139, Wichita, KS 67277 with Stansell Memorial in the memo line.

If you want to watch the service online (or a recording of it later) this link with allow you to do so. It begins on Saturday, November 19, 2022, at 1pm PST.

Entrada anterior: « November 2022 Testimonies from Thailand
Entrada siguiente: A Report from the Luke 10 Exploration Trip to Dubai and Doha »