The sixth of the ten Luke 10 Exploration Trips in 2022 went out October 10-21 to South Sudan, with a team of six from EFC-Rwanda and EFM. Thank you for praying for this team and EFM’s Luke 10 Initiative as Evangelical Friends discern where to launch new mission fields as part of EFM’s Five-Year Goal. See more information aquí.

The following is a report which Brad Carpenter, EFM Missionary to Rwanda, helped prepare. 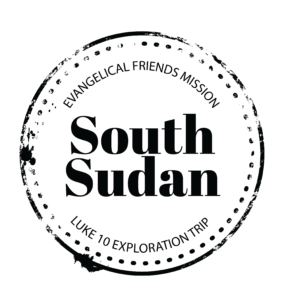 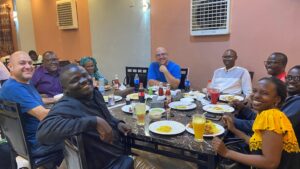 We arrived in Juba, South Sudan on October 11. We were blessed through a friend of Jean Paul’s to connect with a South Sudanese pastor (William) and missionaries from Uganda (Jane, Luke, Veronica, and Faisal) who are living and serving in South Sudan. These leaders helped us find a place to stay, find transportation options and gave us insights we used in choosing which people groups and locations to visit. 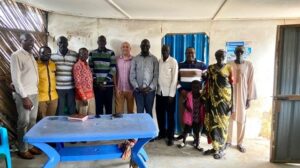 According to the Joshua Project, there are 80 people groups in South Sudan. There are some unreached people groups and many who are under-reached (according to various Christian leaders we talked with). The groups we visited on our trip are: Dinka-Bor, Nuer, Murle, Olubogo, Mundari, and Cholo. We also met many from Ethiopia, Eritrea, Kenya, Uganda, and others.

Some areas of the country were inaccessible at this time because of marshlands that are flooded from heavy rains at this time. South Sudan has suffered through very difficult times since 1983, with much war and many consequences of violence. In each place we visited we found friendly people who were ready to share with us about their culture, beliefs, and their lives in general. Our observation is that there are many people who are open to spiritual things and who desire transformation, peace, and new life that comes from Christ.

As a team we sensed affirmation that EFC-Rwanda is being called to be on mission in South Sudan. We ask that you continue to pray for us as we keep discerning God’s plans. We think the next step will be for another, much longer trip to happen in the dry season. The purpose of this trip would be visit places we were not able to visit and to work toward narrowing down our focus toward a specific place or two that we would then seek to deeply understand.

Thank you for praying with us for this and the other Luke 10 trips. May God continue to lead us into his plans. May his kingdom come and his will be done on earth as it is in heaven.