The fourth of the ten Luke 10 Exploration Trips in 2022 went out last month (June 15-22) with a team of four to East Europe! Thank you for praying for this team and EFM’s Luke 10 Initiative as Evangelical Friends discern where to launch new mission fields as part of EFM’s Five-Year Goal! See more information here.

The following is a report from team leader Jonelle Liddell. The whole team is grateful for your prayers and support!

In addition to this team, little Alex Liddell accompanied his mom and dad on the trip! When we arrived in Hungary, we joined up with EFM missionaries Tony and Agi Frei. 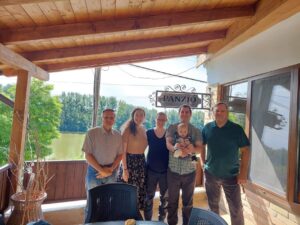 We based out of Tolna, Hungary where EFM missionary Tony Frei works and pastors. We visited his Roma ministry sites in Kolked, Hungary and Backi Monostor, Serbia. The potential new field sites that we explored were in Sombor, Serbia and Osijek and Vukovar, Croatia. We ended the trip with a partial day in Budapest.

We were on the edges of where we want to be but even on the edges we sensed an openness to conversations about the gospel and to deeper connections. All three cities have very little Protestant/evangelical presence. They are mostly Eastern Orthodox (in Sombor) and Catholic (in Osijek and Vukovar), though it seems that religion is largely cultural. So there is a great need for the gospel, specifically for the gospel to be shared in a culturally sensitive and aware manner. 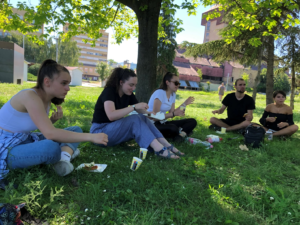 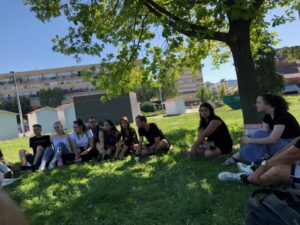 God seemed to be giving us a pretty clear welcome in Osijek. Our first four interactions were: a woman giving us her permit for the paid parking lot with an hour left on it, a woman giving us Croatian cash for the rest of our parking cost before we had a chance to exchange money, a woman at the restaurant giving us peaches from her garden for Alex, and the waiter letting us all leave when we were short of Croatian cash (due to an ordering miscommunication) because he trusted that we would come back to pay the balance.

While we were in Osijek, Stan had a good connection with a group of junior high boys that started with his question about liking ice cream and ended with a brief discussion on whether they knew people who prayed. Tony met and connected with a young family who had a Presbyterian background but were not involved in a church, to our knowledge. And Vivian, Jonelle, and Sabrina (our interpreter) had a long conversation with a Catholic nun who helped us understand the religious landscape a little more and was generally very welcoming.

God also answered many prayers about transportation issues, flight delays and cancellations, interpersonal communication, and individual direction during this trip. Specifically, all three potential future missionaries on the trip came away with far greater clarity about their next steps regarding missions and EFM.