The second of the ten Luke 10 Exploration Trips in 2022 went out last month (May 30-June 10) with a team of six to Greece! Thank you for praying for this team and EFM’s Luke 10 Initiative as Evangelical Friends discern where to launch new mission fields as part of EFM’s Five-Year Goal! See more information aquí.

The following is a report from the team, whom are all very grateful for your prayers and support. 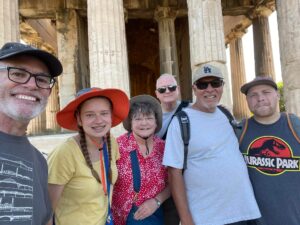 We were tasked with exploring the potential for EFM to plant churches among refugees that have fled unstable situations in the Middle East. Greece is the first point of entry into Europe for those escaping countries such as Afghanistan, Iran, and Syria. Once in Turkey it is a short boat ride to reach the close Greek Islands and potential asylum in Europe. Although Germany, France, and the UK are the primary goal destinations, COVID-19 travel limitations and European political issues have contributed to many refugees finding themselves “stuck” in Greece. 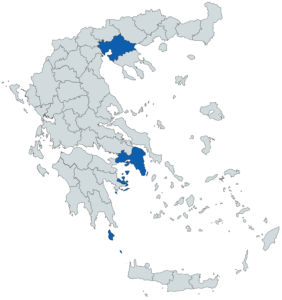 We concentrated on two areas in Greece that have a high concentration of refugees. We spent the first week in Athens (Athina) and then traveled north to the Thessaloniki area where refugees are currently being relocated.

We met with a variety of people from various backgrounds and experiences. Many of our contacts are former Muslim refugees who are now Christ followers and active in evangelism. Discretion in names and photos is often required to protect their ministries and family members in their home countries.