In January of 2016 I spent a wonderful week with the Tintaya family in West Bengal, India. The Tintayas are from Bolivia, South America, and are part of the yearly meeting that Northwest Yearly Meeting (NWYM) helped establish. This yearly meeting just celebrated its centennial. Several generations of Tintayas have been key players in the history of this body of believers.

David, Arminda, Anabel, Anahi, and Joanna Tintaya had been wanting to visit India for some time. They were especially interested in meeting Indian Friends and seeing their ministry. I knew the Tintayas because of the years I spent in South America as a missionary from NWYM. When I heard about their interest in India I invited them to meet me there. They accepted the challenge.

I say “challenge” because it was going to cost them a bundle of money to get there. They were determined to go as a family. Bolivia is a developing nation, so most Bolivians don’t have the kind of cash on hand this trip would require. But the Tintayas put their trust in the Lord and did everything they could to save up and raise additional funds. Lo and behold, the Lord provided!

During the week we spent together in India I watched with fascination the interaction between the Tintayas and their new Indian Friends. It seemed to me like they could relate to each other at a deep level in spite of the language and cultural barriers. Both parties were moved by the testimonies that were shared back and forth. Gift-giving is important in both cultures and there was plenty of that going on.

Of course, there were differences as well. The Tintayas had to restrain themselves from hugging everyone like you do when greeting your brothers and sisters in the Lord in South America. In most of Asia simply putting the palms of your hands together is sufficient. Anna Nixon, a former missionary from Evangelical Friends Church-Eastern Region (EFC-ER) to India used to say it’s the most economical handshake in the world. The Tintayas adapted quite nicely although it must have felt kind of strange.

Another difference is that Bolivian Friends don’t dance in church. Indian Friends do! The picture you see here is the four Tintaya women getting a dancing lesson from their sisters in the Lord from the Santali tribe. I was impressed with how willing they were to get outside of their comfort zone and learn all they could in the brief time they were in India. 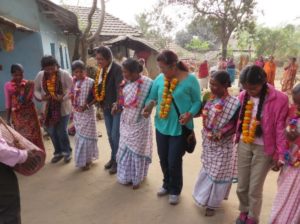 One of their daughters, Anahi, (the one with the green blouse), has been sensing a call to missions in East Asia since she was a child. EFM has been talking with her about doing a nine-month stint in that part of the world in order to test that call. Hopefully by the time you read this letter the plan for this field experience will be firmly in place.

How did we get to this point in the world of Evangelical Friends that a family from Bolivia would visit an EFM mission field in India and that one of the daughters would be processing a call to missionary service in East Asia? In order to answer that question I invite you to work your way through the four lessons that make up the bulk of this year’s Easter Offering materials. May you not only be inspired by what you find in the lessons but also gain clarity about the role the Lord of the harvest wants you to have in this still-unfolding story of Evangelical Friends and the Great Commission.

I’m hoping you will use the lessons in small groups and Sunday school classes during the four weeks leading up to Easter. Then, on Easter Sunday, your church may choose to take up an offering for EFM, or it may encourage individuals and groups to send their offerings directly to EFM.  Whatever is given through this offering will be used for EFM’s work around the world.  As you will see in the lessons, our responsibilities and areas of involvement have become much bigger in recent years. We need both your prayers and financial support.

EFM’s purpose and passion is to fuel a worldwide movement of people who seek first the kingdom of God, planting churches that live and die to carry out the Great Commission in the spirit of the Great Commandment. LET’S GO TOGETHER TO THE ENDS OF THE EARTH!

Your fellow servant in Christ,

Our commitment to you is that all donations to EFM are used as designated. Once a ministry is fully funded, we follow policy to use funds for the next closest ministry need. 100% of every gift to EFM goes into the project or missionary fund to which it is given.